To come up to speed with the boat, look at the “Newsletters” Tab in this “What’s News” section. Newsletters are there for 2020 (May, August, and November) and for February 2021. The newsletters have a lot of news regarding our activities during the 2020 pandemic. We have also had our first in-person meeting after the pandemic and it was a huge success. We had about 80 people show up for VADM Fritz Roegge’s excellent presentation. All in the room complimented him and the Q&A was extensive. We expect to grow more this year with increasing attendance.”

After the February Newsletter the boat departed for a six- or seven-month deployment to WestPac. It is now conducting highly classified “Special Operations” as directed by the Commander in Chief, Pacific (CINCPAC). Please put the crew in your prayers for a safe return to Pearl Harbor later this year. 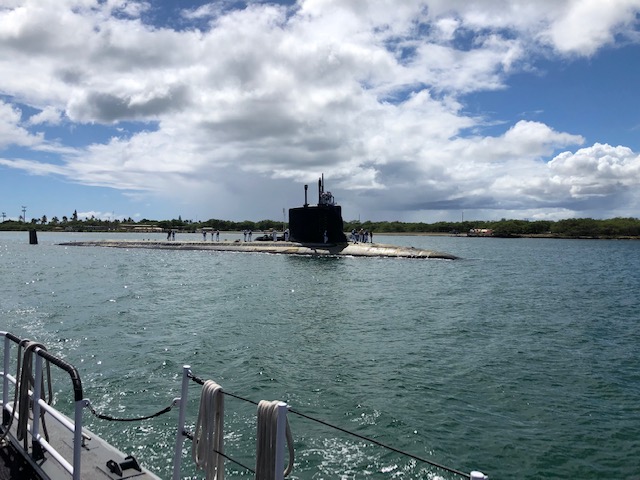 The USS ILLINOIS (SSN-786) inside Pearl Harbor heading for the Submarine Base after a most successful 7-month deployment to Westpac—October 1, 2019 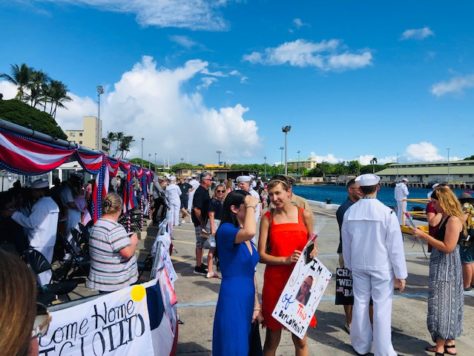 “Ohana” (“family” in Hawaiian) gathering on pier eagerly Awaiting the arrival of their spouses and dads on the USS ILLINOIS after its 7-month WestPac deployment. 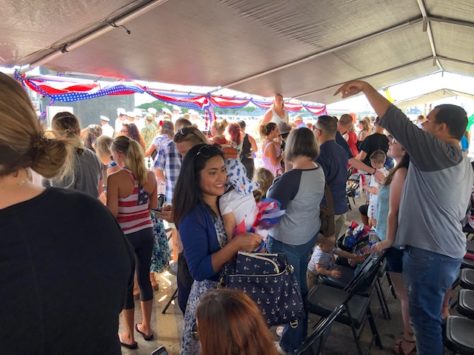 “Ohana” Aloha (“welcome home”) party with spouses & kids greeting their loved ones in tents alongside the USS ILLINOIS moored at the U.S.Submarine Base, Pearl Harbor

The USS ILLINOIS returned from a 7-month deployment to the Western Pacific on October 1, 2019. This was its first deployment. It did so well that the Theater Commander, CINCPAC, extended its deployment for a month and cancelled port calls. All the Admirals applauded the great success of the boat’s deployment: “I can’t tell you what she did, but it was absolutely outstanding!”

Besides the “Ohana” (“family” in Hawaiian) gathered on the pier,the 786Club was in attendance with a small group who visited Pearl Harbor to extend our Alohas to the returning crew. We gave each crew member a “First Deployment” challenge coin as they stepped off the boat onto the red carpet and gave each crew member a flower lei. Later in the week, our 786 Club group hosted a “pre-change of command” dinner (the original change of commandwas delayed by a month but our group had already booked flights out to Hawaii—the change of will occur on November 8, 2018 with CDR (Captain selectee) Neil Steinhagen, USN being relieved by CDR Ronald Hatt, USN. Farewell and Following Seas to Captain Neil Steinhagen; Aloha and Best Wishes for Great Success to the incoming Commanding Officer, Captain Ron Hatt. 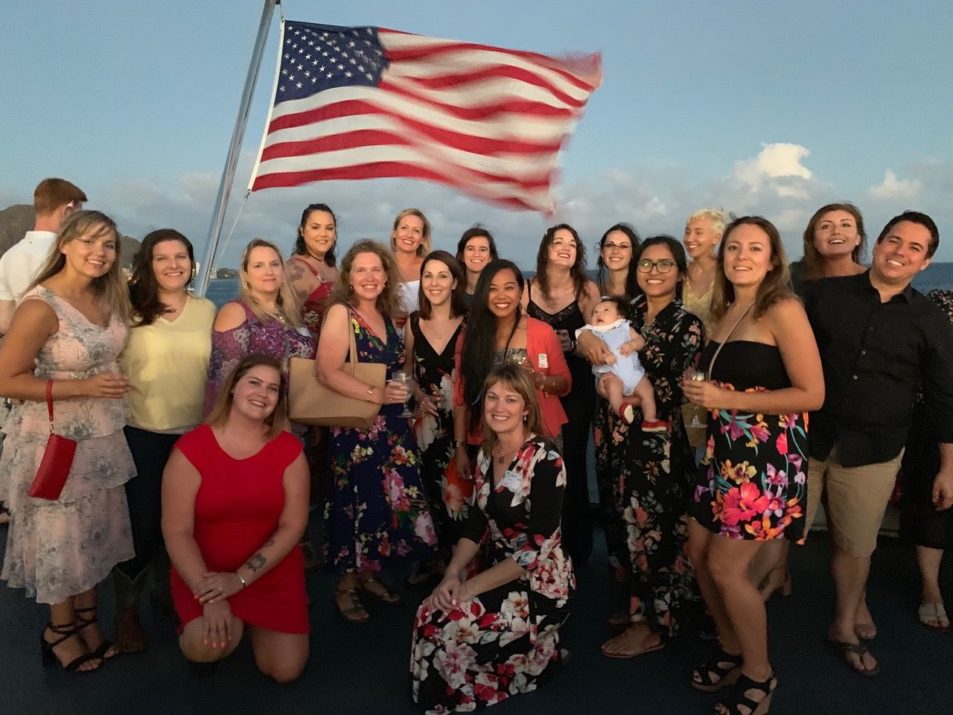 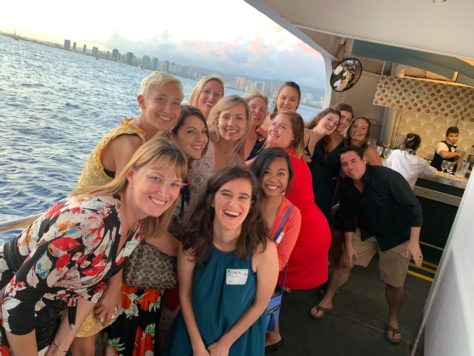 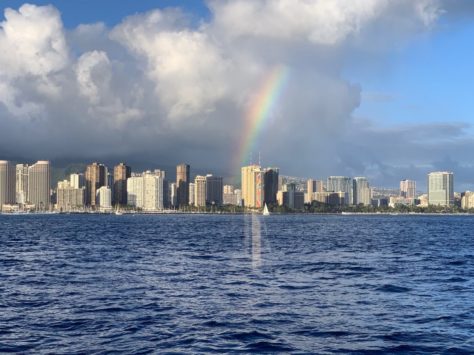 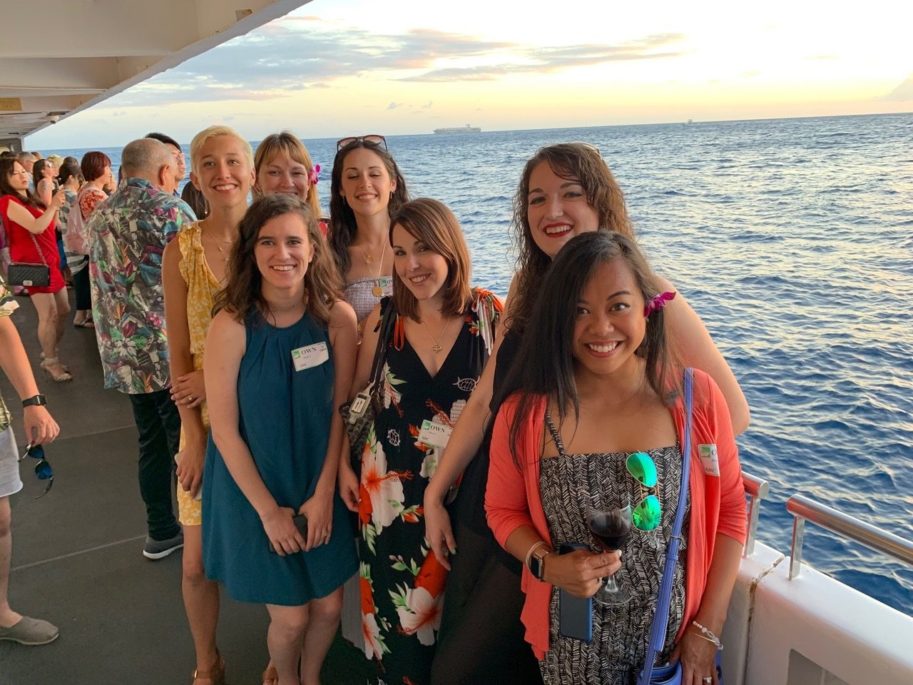 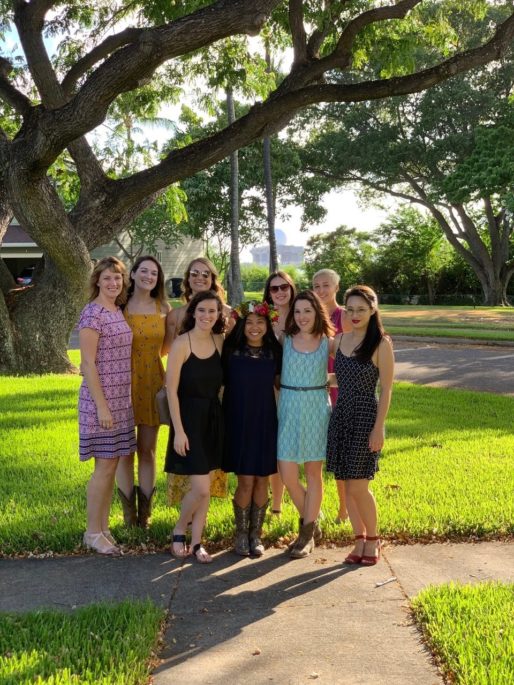 Wives and significant others celebrated Half-Way on the same day as the crew. We received a grateful email from the head of the FRG:

“I want to give you some more details about Halfway Night.
We enjoyed the dinner cruise aboard the “STAR of Honolulu” (highly recommend the cruise by the way)
We were greeted with Mai Tai’s and seated in the main dining room where they had musical entertainment in the form of ukulele’s playing.
After enjoying dinner, the island dancers came out and it was so much fun to watch.
Following the show, we met on the deck to take photos and enjoy the sunset before the fireworks from Waikiki started going off.
It was so nice to enjoy each others company, and be surrounded by people that can relate to the military family lifestyle.
Thank you so much to you and the 786 Club for making this a realty for the spouses aboard the lllinois!”

The wives did a fund raising activity to lower the cost of the evening and the 786 Club matched their efforts, in total contributing $2,000 to the evening. We have equal appreciation for our sailors and their loved ones who both sacrifice to protect our freedom.

Before departure, Club members provided “goodies” and “treats” for single sailors (the majority of sailors on the USS ILLINOIS) for their Half-Way celebration. 92 boxes were packed by the FRG and loaded on to the boat in preparation for this much anticipated milestone. Our support was appreciated by the sailors as is expressed in the Captain’s sincere and thoughtful letter to the Club.

We all remain ever thankful for the professional execution of their mission and we can be proud of the support that we provide the crew and families. We look forward to their safe return and to continuing our support of future deployments.

USS ILLINOIS departs on her first deployment.  She is headed for points unknown to the public and is planned to be away from home port for 6 months. Departure was preceded by a pier side cook out for the crew and family members. Club members Tom and Harriet Noonan were in Hawaii and reached out to Commander Steinhagen. They were invited to attend the “send-off”. Family and friends gathered at the mouth of the harbor to wave one last good bye as the boat reached the Pacific Ocean. 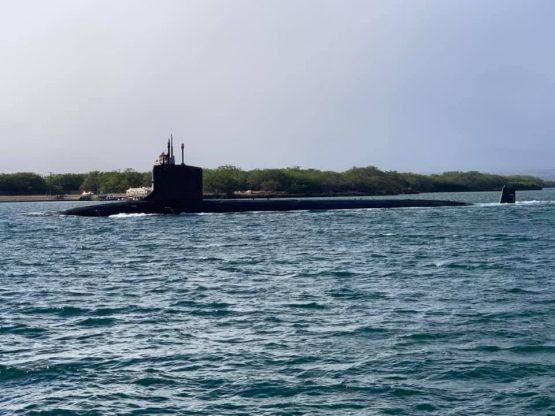 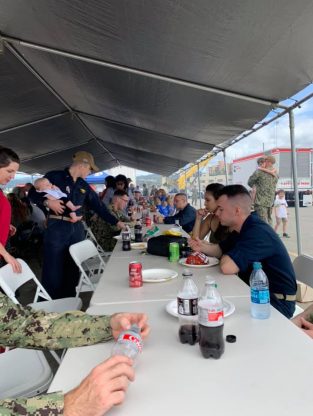 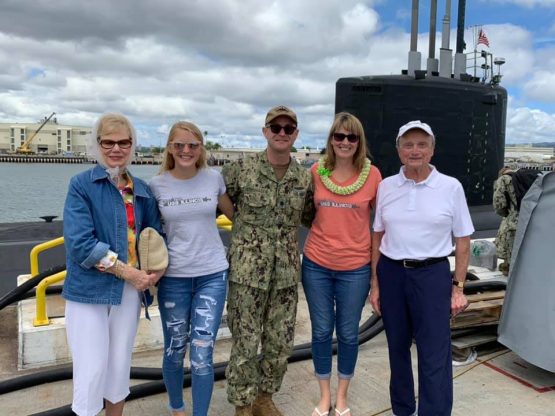 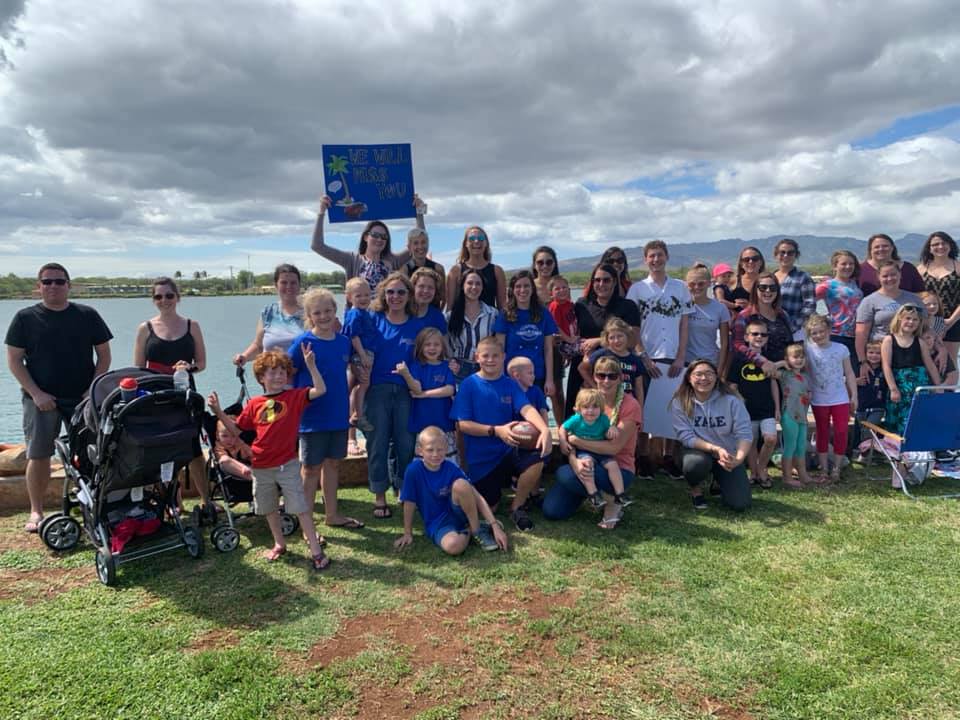 Sign up to be on the Facebook page with the FRG and stay up to date on any publicly released updates.

The FRG finished packing “halfway” boxes for the single sailors and shared pictures with us.  92 boxes were loaded on board before departure. 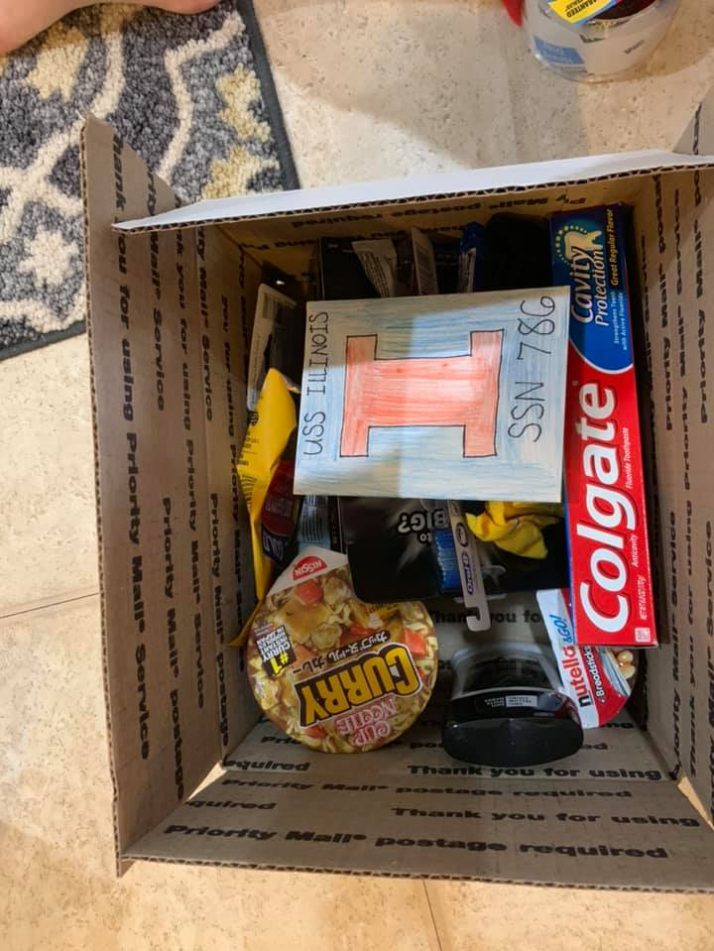 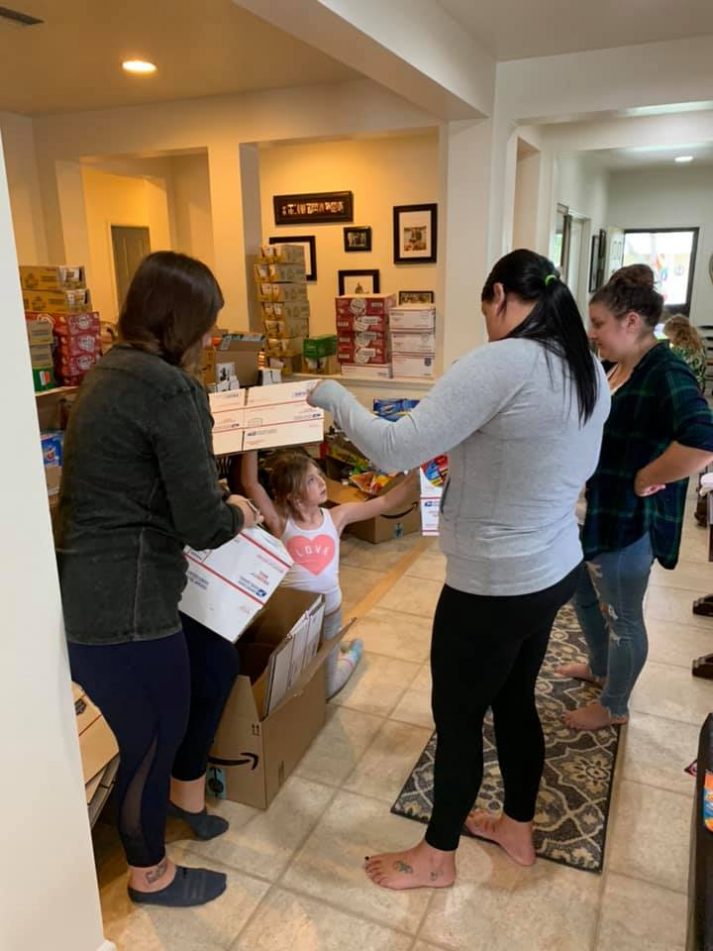 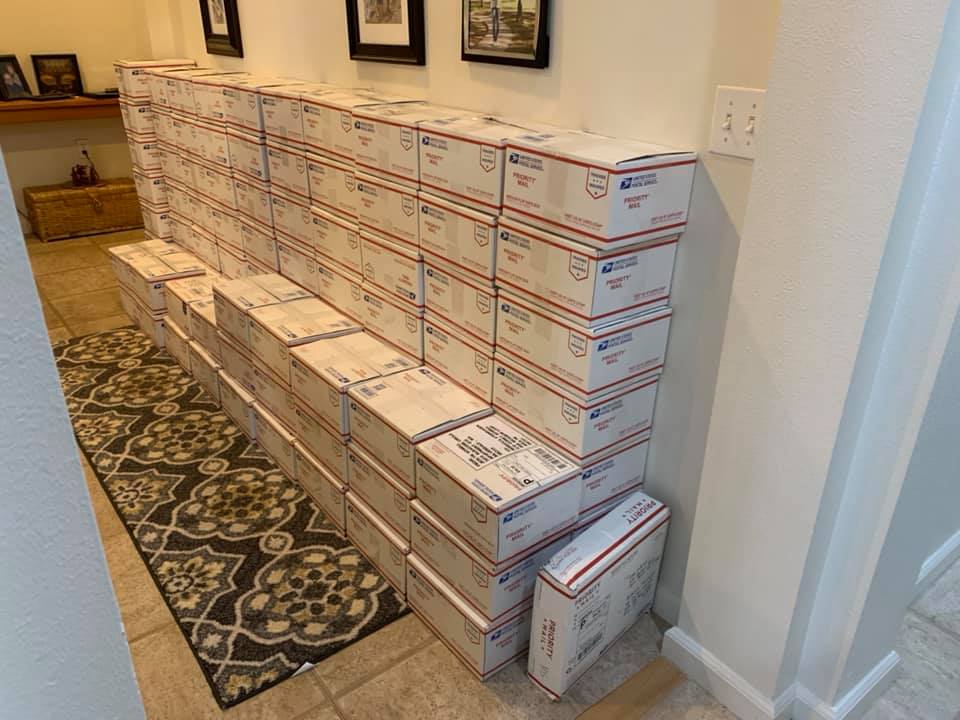 Navy submarines traditionally celebrate briefly upon reaching the “halfway” point of a deployment. On that date sailors open boxes of favorite treats and goodies that were packed by loved ones before their departure. Single sailors often don’t receive the same “halfway” support that married sailors do.  With the help of the FRG, many 786 Club members went on Amazon and purchased items to help fill these boxes for the single sailors.  Club member response was excellent.  We’ll do this again and if you’d like to be involved on the next deployment you’ll have to act quickly.

The 786 Club is a 501(c)(3) organization and all donations are deductible to the extent allowed by law.